← more from
Royal Potato Family
Get fresh music recommendations delivered to your inbox every Friday. 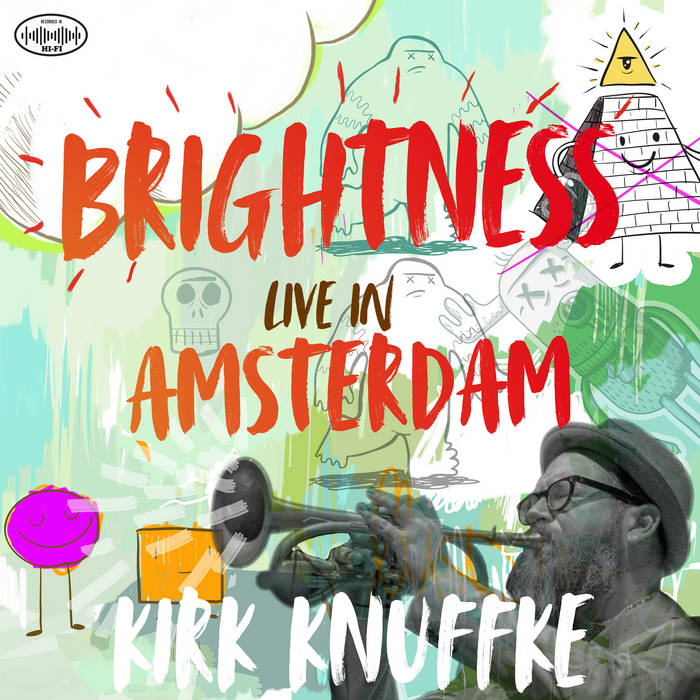 Startling inventiveness, moment-to-moment creative sparks, and alchemical reactivity combine in always surprising ways throughout the work of cornetist and composer Kirk Knuffke. It may come as something of a surprise, then, to realize that he’s never released a live date as a leader. While Knuffke’s been an essential component of many a collaborator’s concert albums and of course logged countless hours on stages around the road, his own catalogue has been almost wholly crafted in recording studios.

That’s just one way in which Brightness: Live in Amsterdam marks an important first for Knuffke. The album, due out February 21, 2020 via Royal Potato Family, documents his bandleader debut at the storied Bimhuis, one of the world’s most revered and adventurous concert venues. It also offers his first ventures as a vocalist, a practice he’s engaged in often at home and occasionally on stage, but never until now captured for posterity.

In other ways, though, Brightness is a continuation of the dazzling evolution of Knuffke’s musical identity, a combination of tradition-minded swing and inspiration-embracing freedom, a freewheeling looseness that leaves room for a brilliantly focused vision. Brightness reconvenes the unexpected trio that debuted on the acclaimed 2015 release Arms & Hands, which teamed Knuffke with a pair of open-minded veterans: drummer Bill Goodwin and bassist Mark Helias.

“Mark and Bill are such legends, I’m just happy they want to go along on this ride with me,” Knuffke says. “With this trio I try to make the music as minimal as possible so that we remain free to go in many, many different directions. It’s amazing how little it can take to get these guys going off somewhere really special. Musically it’s a series of amazing surprises all the time.”

Knuffke’s particular compositional gift is in distilling instantly engaging and memorable music into such minimal form. The pages of his music may not be crammed with notes and complicated time signatures, but they linger in the ear like a smash hit pop song while illuminating the synapses with clever ideas.

Goodwin certainly found himself captivated by the results of this collaboration. As the producer of many of his longtime collaborator Phil Woods’ concert recordings, the drummer is well versed in recognizing what makes a great live album. Hearing the trio’s Bimhuis sessions, he strongly encouraged Knuffke to release the material. “He’s a multi-Grammy-winning record producer,” Knuffke says, “so I decided that I should take his word for it.”

Knuffke’s stellar command of his challenging horn is evident in his unaccompanied intro to the album’s title tune. He’s soon joined by his trio mates, who lay down a gentle, elusive rhythm for the cornetist’s probing lines. The tune is dedicated to and inspired by Sun Ra, whose cosmic music Knuffke delved deeply into, listening to the bandleader’s extensive catalog in chronological order – both forwards and backwards in time.

The buoyant parade rhythm of “Rise” is indebted to its honoree, Knuffke’s close collaborator Kenny Wollesen. Each of Knuffke’s compositions bears a dedication, a practice inspired by one of his chief inspirations, the late Steve Lacy – the recipient of his own tribute on “Odds,” its off-kilter theme an echo of the soprano master’s penchant for offbeat melodies.

Knuffke unveils his singing voice on “White Shoulders,” its sensuous lyric taken from a Carl Sandburg poem. The Pulitzer-winning Poet Laureate of Illinois has also been a rich vein of inspiration for Knuffke’s longtime collaborator Matt Wilson, and here inspires both “White Shoulders” and the political rallying cry of “The Mob, The Crowd, The Mass.”

While Knuffke always sang while composing, it was only at his wife’s urging that he brought that element into his live performances. “All of my music comes from singing,” he explains. “As a horn player if you sit down at a piano and start plunking out notes, they’re not necessarily the sounds that come right out of your brain. I never write from the piano; I write from my horn and from singing. Then my wife encouraged me to sing on my gigs, and since so much of this music was written from poetry, I thought it needed to be a part of the show to complete the image and story of these pieces.”

“That’s a Shame” is dedicated to the great alto saxophonist Jimmy Lyons, best known for his work with the Cecil Taylor Unit. The piece was born from a game of compositional telephone, in which Knuffke would listen to Lyons’ work while on the road, then shut the music off and write the first thing that came to mind. The album concludes with “Spares and Falls,” which joins two separate pieces: “Spares” was inspired by the singsong come-on of a panhandler in Knuffke’s Hell’s Kitchen neighborhood, while the descending line of “Falls” was drawn from a painting of a falling man.

The thrilling performances on Brightness make Knuffke’s long-overdue live debut feel well worth the wait. “You act and feel so different live,” he says. “You don’t have headphones on, you’re not in a strange room with no windows, worried about how long everything is taking. You just play the gig.”

Amsterdam’s Bimhuis, the site of memorable recordings by a range of artists, from Ornette Coleman to Fred Hersch to Helias’ BassDrumBone trio, also helped fuel an album-worthy performance. “I was very inspired that I got to lead a group there,” Knuffke says. “I have such great documents by some of my musical heroes that were recorded there, so I wanted to contribute my own. The audience there is not passive; they’re very active listeners, dedicated to every note, so it’s really fun to play there.”

Knuffke is a prolific composer and improviser who earned the top spot as “Rising Star Trumpet” in DownBeat Magazine’s 2015 Critics Poll. He has worked with a host of incredible musicians including Roswell Rudd, William Parker, Uri Caine, Myra Melford, Allison Miller, Steve Swell, Billy Hart, Karl Berger, Ted Brown, Whit Dickey and Mary Halvorson. Knuffke is currently a member of the Matt Wilson Quartet and Allison Miller's Boom Tic Boom, and has recently performed as part of the ensemble for Cécile McLorin Salvant’s one-woman opera “Ogresse,” which will be released in 2020. Knuffke’s leader debut, Big Wig, was released by Clean Feed in 2008, followed by the trio recordings Chew Your Food, Amnesia Brown, CherryCo (National Public Radio's Jazz Record of the Year for 2017); and the quartet albums Pund Cake, Lamplighter and Chorale, among others. 2015’s Arms & Hands debuted his remarkable trio with Bill Goodwin and Mark Helias.

Bandcamp Daily  your guide to the world of Bandcamp